(editors note: - apologies for the delay in posting - got lost in the mix of SPAM and other assorted meats.....) 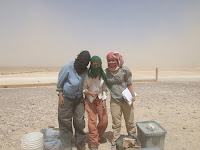 This week went by extremely quickly – we had a full week on-site, but it flew by. On our last days of the week (Tues-Thurs), the wind was really bad and we had to quit work early all three days because the wind and sand drove us away! It was almost filling our trenches faster than we could dig! In fact, we had to spend a great deal of time the next Sat after our day off digging ourselves out of the sand. I was in Amman on the Wednesday afternoon when the wind was the worst and Kevin and I drove through a small sandstorm on the road from Azraq to Amman. 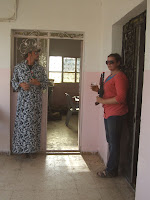 I called Danielle to ask her to batten down the hatches in Azraq and make sure all our equipment and samples were packed up from the wind – Bryn seems to have taken this request to heart and did some patrolling around the ‘compound’. 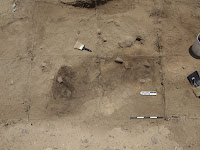 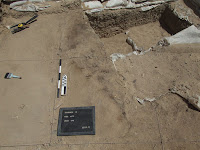 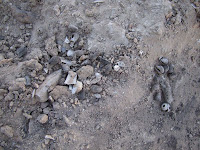 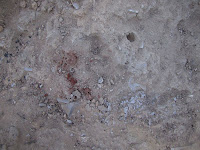 But, to get to the work, in Area B we worked on continuing to uncover two main features: a) the dark layer we discovered in 2008-2009 that we suspect is a hut structure or massive hearth (pic of Area B) and b) another feature that is looking more and more like (a) and of which the horn core cache appears to be a part of. During this process Hilary and I stepped back a trench to more fully expose the dark layer which went into the south baulk further than we expected. We dug out more the bone bed and got down to the dark feature quickly. While then cleaning off the layers on top of this dark-coloured feature Hilary uncovered a small cache of pierced marine shell (pic) and large amount of red ochre (pic). At the same time, Bryn, Maria and Steve worked on the other potential feature further south (area B possible hearth?). 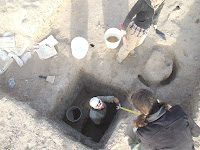 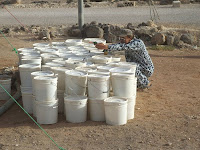 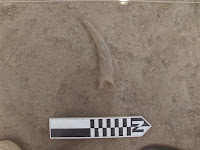 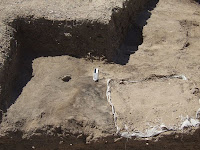 In Area A, more gazelle horn cores, but here unburnt and isolated, came up within the compact surfaces. In the deep trench, Danielle and Jen are getting quite deep through the lake/marsh deposits – by the end of the week they were at the same level as the adjacent wadi deposits (about 2 m from the surface on-site, see pic Jen in trench). It is still not sterile – argh! Actually, the most exciting find of the week came out of this trench. Artifact densities actually began picking up with depth and alongside a dense collection of gazelle horn cores and lithics they pulled out a proximal humerus of a hippo – yes, a hippo! Hippo-hunters of the Epipalaeolithic – very cool. 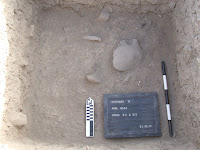 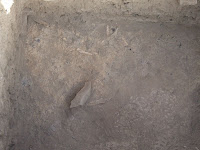 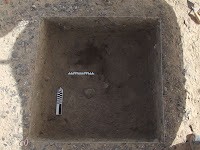 Kevin and Karl are still working on their trenches. Kevin is now well below 60 cm and definitely not in sterile deposits. He hit a few hearth features and as dumps and just finished excavating part of an occupational surface. Karl is also digging hearth features to the north and east of Area B in a completely untested part of the site. 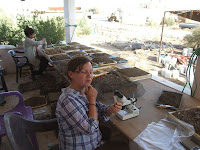 Things are also moving along nicely in the lab. Elizabeth continues to reign over the flotation (just barely some days as the buckets do pile up), but the flot teams are now in heated competition for the most number of litres to float in one day – the record is currently held by Rebecca and Karl at 347 litres. We are doing fairly well keeping up with the 4 mm sorting from Area A and certainly providing enough material fro Anna who is an extraordinarily dedicated lady and had probably now looked at more gazelle bones than she ever dreamed she would…And this is the only the beginning of the dissertation! Christophe has been a master of Illustrator, producing excellent geological and topo maps of the Kharaneh area and nearby flint outcrops. In the few weeks that he has been here he has managed to track pretty much all of the flint types we see on site, and the ochre sources as well.

On Thursday we stopped work early and those of us keen on Middle Palaeolithic sites went on a field trip up to Deir Alla to visit Aaron Stutz and his crew excavating a cave in Wadi Rajeb (and to steal Toby away and bring him to Azraq!). It was a bit of a drive, and the crew stopped in Amman to pick me up (I was already there), then we headed into the Jordan Valley. We got a wonderful tour of the cave and a peak at their lithics and fauna. They have just begun and still have lots of digging to do, but definitely have some interesting finds from the cave. Then, Jen, Hilary, Elizabeth, Danielle, Kevin, Toby and myself headed to Madaba. Danielle, Kevin Toby and I stayed with Deb and her staff at the Tell Madaba dig house (thanks Deb!) and had a night on the town at Haret Djoudna and on Deb’s roof, then had a really lazy next day – a well-earned break. The other girls went to Mystic Pizza and did quite a bit of shopping. Before heading back to Azraq we stopped in Amman and visited with Mo and Yo, Jason, Phil and Leslie at ACOR to catch up over some Amstel. The rest of the crew stayed in Azraq and hung out. Rebecca and Susannah did a massive amount of very tasty baking that was much appreciated by the rest of us!
Posted by Epipaleolithic Foragers in Azraq Project at 7:10 AM