Its week two and we are digging maniacs! Both the West Side and East Side had a really productive first day mapping and excavating features. It was also our first School Day of the year organised and expertly pulled off by Alison Damick and Ahmad Lash. We had ten 13-year-old boys from a school in south Azraq come to the site for the day to learn about prehistoric archaeology and to have a day-in-the-life of an archaeologist. The kids began with a tour of the site and of prehistoric archaeology in the region. Then they split into two groups: one group learned how to navigate and survey with a GPS (with prizes at the finish) while the other excavated some surface deposits on-site. They learned how to record the sediment, excavate, and sieve the material – including finding lots and lots of lithics and animal bone and sea shells. Then, the students had lunch and received certificates for their hard work as archaeologists at Kharaneh. A very successful day. 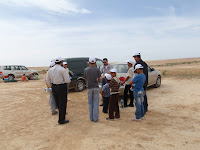 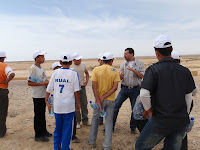 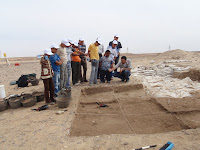 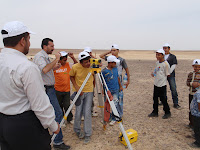 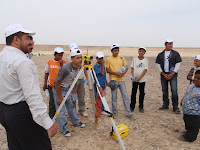 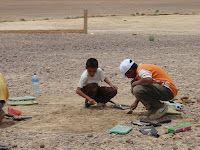 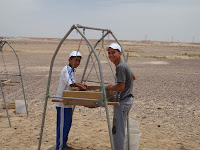 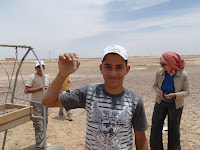 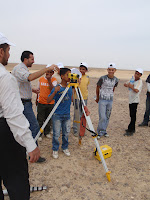 Sunday was a little breezy, to say the least, and we couldn’t actually work on-site so we had a catch-up day in the lab – got a lot of flotation done and 4 mm fraction sorted! It was one the those memorable Kharaneh days and we had to post a guard at the total station to make sure that it didn’t topple over in the wind, and when flotation is made easier because most of the sediment blew away before you could get it into the bucket. So, we made a half-hearted attempt to get some mapping done, but after two hours, and not being able to recognize anyone because they were bundled in scarves and hats, we called it an early day on-site and went back to the lab.

The next day the wind died down and all was back to normal. In fact, the weather was amazing – nice and sunny, but with a refreshing cool breeze! In Area A, the work concentrated on several post-hole like features – nine of them were excavated that day. In Area B we focussed on sorting out the large number of loci that keep appearing in this stratigraphically-complex area. We essentially have several superimposed ash and refuse dumps, hearth cleanings, and pit features within a soft silty layer. It is taking some time to sort out, but we are getting there. Today we also had some visitors to the site – Deb Foran, Mashour and Deb’s parents who are visiting from Canada! They came to see the site and then joined us for lunch back in Azraq. 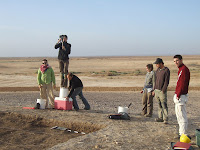 The rest of the week went along without a hitch, or mostly so. We had visitors again the next day – David Kennedy and crew, who were passing through Azraq and also came for dinner and Amstel the next night at the dig house. The A-Team continued excavating two superimposed hearths and related post-holes (this includes Danielle, Rebecca, Hazar, Clareana, Naomi, and Susannah). On the west side, myself, Steve, Bryn, Maria, Hilary, Jen Jones and Alison are sorting out the series of ash deposits and pit fills, hoping to get down to some surfaces and a pit fill we excavated at the end of last season. Elizabeth and Anna (and daily helpers from the crew) are our crack lab team – processing more faunal material and flotation samples daily than imaginable! Louise Martin arrived this week to help Anna further develop a system for sorting and analysing the faunal samples and we are scrambling to continually find more samples for them to get through! We are loving having Louise here as she is filling us in with stories of working in Azraq when there was water and stories! 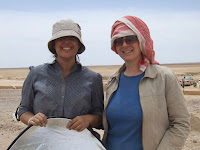 The last two days were crazy hot on-site, especially after a first week where we had to wear fleeces on-site until about 10 am! It was 37 on Wed and 39 on Thurs – the heat took down a few people, as it usually does, who are now resting and recovered. Thurs was actually quite odd weather, as is today (Friday). The day was extraordinarily hot for this time of year, and by the time we left site it was getting overcast. On the drive from Azraq to Amman we actually drove through a rain storm in the desert! Really! It poured rain for about 2 minutes and we actually had to use the windshield wipers, then it was gone. After it passed everywhere was unusually dusty and hazy – so much so that you cannot see across town. Today is the same hazy and dusty weather. Hopefully it will clear by tomorrow when we are back on-site.

This day off was very easy-going – some R & R in Madaba. We drove in directly from Azraq (with only a small shopping trip in Amman on the way) to the Mariam, went to Haret Djoudna for dinner (lots of mushrooms with rosemary and labaneh with thyme), then back to the hotel to watch MBCAction and hang by the pool. There was more of that the next day, along with cheese sandwiches and mixed fruit juice at the Ayola and shopping – pictures to follow!
Posted by Epipaleolithic Foragers in Azraq Project at 4:36 PM No comments: 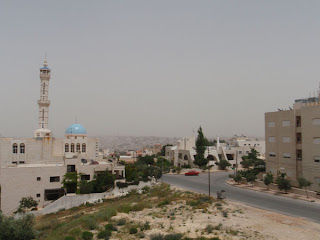 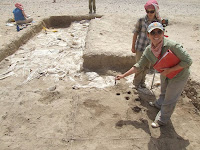 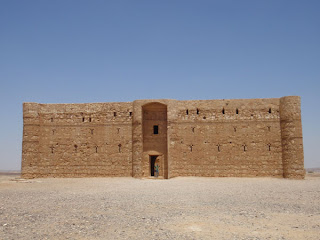 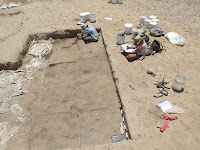 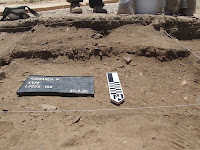 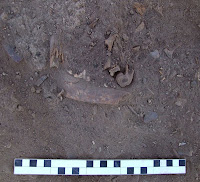 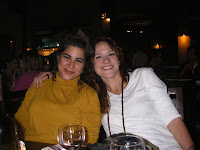 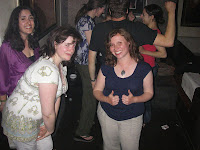 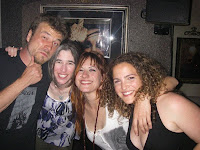 Posted by Epipaleolithic Foragers in Azraq Project at 5:24 AM No comments: 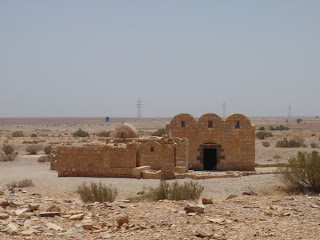 Greetings all. Well - the 2010 field season at Kharaneh has begun and we'll be following up with more information in a few days. In the meantime, enjoy a couple of pics showing the beauty and wonder of the Jordanian world - both ancient and modern. The team has apparently uncovered some very interesting features within the first few days of digging and it promises to be a very productive season - fingers are crossed! 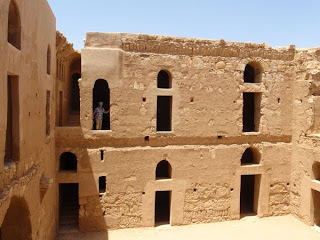 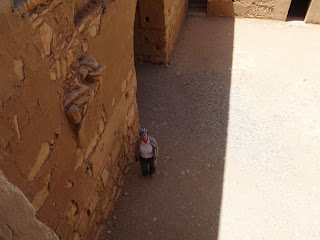 Posted by Epipaleolithic Foragers in Azraq Project at 8:37 AM No comments: