Week 2.5 Up-date We are now into our third week of excavations and I just wanted to post some pictures of objects and features we have found so far. 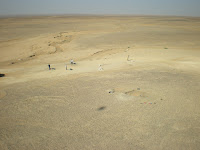 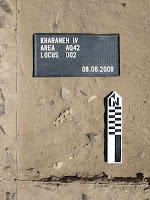 Adjacent to Muheisen’s 1981 excavations in the Early Epipalaeolithic deposits, we are now excavating several pits (image from Area BE75) and charcoal-rich, ashy layers. In our new excavation squares adjacent to Muheisen’s 1985 excavations in the Middle Epipalaeolithic deposits, we are just above a floor deposit reported by Muheisen (and luckily some of it remains in his old sections) and have come down on a layer rich in lithics and well-preserved faunal remains, including several articulated vertebrae (image from Area AQ42). We did have one absolutely crazy windy day, where more dirt flew out over the sieve, rather than going through it, and the lithics were literally blown out of our hands (oops, so not really 100% collection that day). We had to quit early that day, but the weather seems to have settled into the normal hot desert, with a gentle, hot breeze! The nice thing about the wind is that we have been able to get a few good kite photos of the site, including the one taken by Andrew here. In both our new excavations and in Muheisen’s old trenches (which we removed the backfill from), we have recovered a large number of shell beads and several pieces of worked bone, some of which are shown here 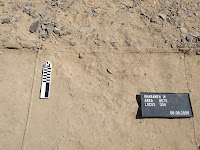 . The worked bone is particularly exciting and mainly consists of long bone fragments with parallel incised lines running perpendicular to the long axis of the bone. In some cases, the incisions form a repeated pattern with several lines separated by spaces. We have also recovered one bone awl/point and a very delicate bone ‘needle’. Not too much else to report yet, but more to follow by the end of the week...Also, I just wanted to mention that, due to time factors and internet connection speed, I have stuck mainly to dig-related posts, while Andrew's blog (Archaeology in Jordan, follow link on this page), deals more with non-dig adventures... please check it out too! 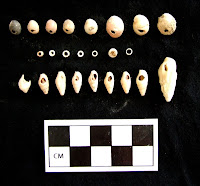 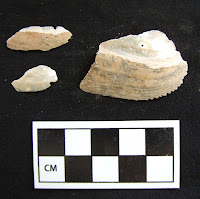 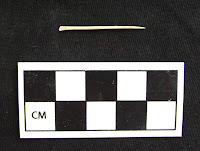 Posted by Epipaleolithic Foragers in Azraq Project at 10:43 PM