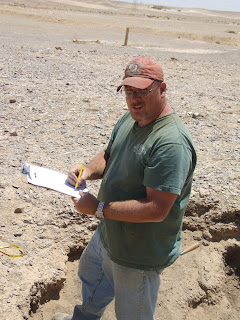 Week 2: The Slow March Forward...
Well, it is that time of week again, time for another posting. It is Friday morning and I am writing this by the poolside at the Miriam Hotel in Madaba, after just having a little swim. Ahhh, the good life in Jordan! Today is the first day off that I have been able to sleep in, relax, and I think I will do a little shopping in Madaba and at the Madaba Handicraft Centre (for those of you who know my weakness for jewellery or have been there with me, you understand my excitement!). Just as an aside, as you can tell, this blog is becoming more of a train of thought, than any official report on our excavations! Today has been wonderful and relaxing – yeah for the Miriam! Last night we all headed into Amman early and went to see the Indiana Jones movie at City Mall – which was quite enjoyable, if a little unexpected in plot. But, certainly lots of good one-liners, which we have already appropriated for the dig! 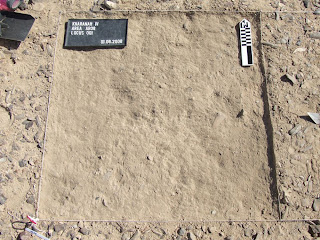 Unfortunately, we had to say goodbye to Sue, Louise, Joe, Matt and Kelly at the end of the first week, but then by the end of the week, we gained Jennifer Jones and Hussein Medinah. So, now, we are getting into the work groove – up at 4:10 am, leaving for site at 5 am (1/2 hour drive each way), a ½ hour for 2nd breakfast at 9 am, then stop digging at 11:15 am, packing it in and heading back to sort through the 2 mm sieve collection and work on the lithics and faunal material – very time-consuming! Then, we have lunch at 2 pm, a little break and nap, and some more lab work in the late afternoon, then dinner and sleep (mmm, precious sleep). 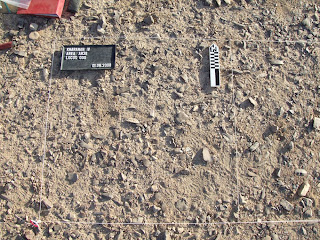 We had a very good week in-site this week and got a lot accomplished. It doesn’t sound like it when I write it here because we did the same thing is many little 1x1m areas, but we did get quite a bit accomplished. After the first day (Sat) Andrew and I had finished the setting the site datum and grid and laid out all the new excavation areas, which are basically along the north and east margins of Muheisen’s two largest excavation trenches (one in the Middle EP deposits, and one in the Early EP deposits). And, we began excavating these. The surface deposits took forever, as there was easily more bone and chipped stone than actual dirt. The locus immediately below is quite similar and this is what we are just finished up working on now. Actually, one area (the Middle EP area) is now coming down onto nice EP deposits,

with large pieces of flat-lying bone and tools, and burnt patches. We can see from the sections in Muheisen’s old trench here and from the publications on his excavations in this area that we are about 15 cm above a floor, with hearth deposits and postholes, excavated by Muheisen in 1985 whose horizontal extent we want to trace this season. The other area (with the Early EP deposits) 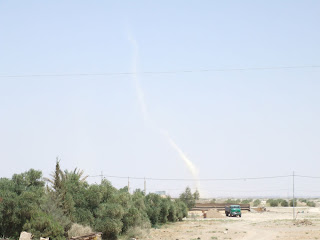 has a very hard carbonate-concreted surface that actually required the faz kabir to remove! I never thought I would take a big pick to the site, but unfortunately it was the only way to remove the deposits that had become solid rock! However, it is only about 10-20 cm thick and underneath they are coming down on nice, softer, deposits. We can see here again in Muheisen’s sections from his previous excavations

in 1981 and his sections and descriptions from this area, that this concreted deposit extends over quite a large area in this, the highest part, of the site and likely results from long-term carbonate development during wet periods (i.e., rainwater cementing the deposits).
We have continued to find obscene amounts of flint and bone, and really quite a lot of perforated shell, from either the Mediterranean or Red Seas, and a few more pieces of worked bone. But, thank god, the densities do actually drop with depth!
We also had some good windy days and Andrew was able to get the kite camera up and take some good overhead shots of the excavations. He already has some posted on his blog (see link from here), and I will post some more here next week.
Well, not too much else to report and now I am going to enjoy the rest of my day off! So, to the pool...

Posted by Epipaleolithic Foragers in Azraq Project at 5:46 AM