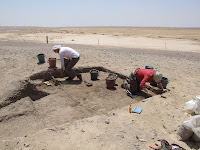 Another week in Azraq and Kharaneh. The first three days of this week went by very quickly, and without too much excitement. In Area A, we got down to the compact surface in most areas, but along the western edge of the Area we discovered several dark brown, organic-rich and grey, ashy stained areas, which had to be mapped in and sampled. Since these features also extended into the adjacent unexcavated squares, we also had to open up some new 1x1 m areas to get the full extent of these features. So, most of the week was involved in opening these new areas and getting everything down to the level of the lowest squares. 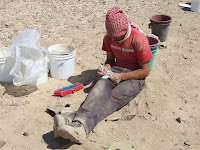 In Area B, Steve has been trying to sort out two particular squares which are really very confusing and have quite a few modern and ancient pit features that are driving him absolutely crazy (although fast-forward to the end of week 3, and he has it all sorted out now). The rest of the crew here have been trying to get through the first of the undisturbed levels. Already by the end of the week there are some interesting heavily mottled areas. The deposits here continue to be incredibly dense in lithics and fauna well below the surface. 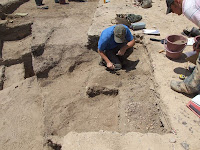 Kevin came to visit and work on the site for a few days this week. I was really happy that he came out to see the site and work on it, but he kept writing in his field notes ‘No pottery found today’. This was not really the most helpful comment, since the site is occupied long before pottery was around! On Monday after work Toby, Danielle and myself headed into Amman for the Dept of Antiquities Prehistory Meeting from May 26-28. Toby and I presented on the 26th about Kharaneh and Ayn Qasiyah – actually that day was a bit of an Azraq Basin marathon – and Kevin presented on Ziqlab on the 27th. So, while we were in Amman on the 26th the crew was working on-site leaderless (and it went quite well, so perhaps Toby and I can sleep in a few other mornings…). On Tues, Toby and Danielle went back to site from Amman to give them a hand and bring Steve and Alison with all our vehicles into Amman, while I chaired a session at the conference. That night we went to 80’s retro night at a club in Amman – a night of dancing to 80’s music was just what we needed (that night – not the morning after)! The last day of the conference was a short day with a meeting about policy and practice for prehistoric projects in Jordan, followed by a really nice dinner courtesy of the Dept of Antiquities. The crew back in Azraq had a lab day of sorting through sieved material from the site for lithics and bone (all done with lost of music and singing and coffee and tea). 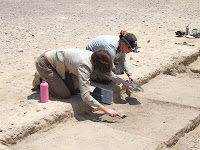 On the Friday and Saturday, Toby and I organised an informal ‘Azraq Workshop’, which was us getting together people who have and are now working on archaeological and palaeoenvironmental research in the Azraq Basin for a tour of archaeological sites and a round-table discussion of current and future, collaborative research plans. We felt that it was a very successful two days – the first day was a large crew of people on a fantastic tour of the Wadi Jilat sites with Andy Garrard and then a quick stop at Kharaneh to check out our progress before heading to Azraq.

We were a convoy of 5 four-wheel drive trucks ploughing through the desert with a purpose (= getting to Jilat; those of you who were present for our attempt last summer will remember that it is no small feat). About 6 people from this trip stayed at our dig house for the night to enjoy a BBQ and the metropolis of Azraq. The second morning, we toured the Azraq Druze Marsh sites of April and Carlos, then to the wetlands sites of Ayn Qasiyah and Ayn Soda. In the afternoon we had a round-table at the really swish Ecolodge to talk about public outreach, future collaborative research plans, and establishing a research community to keep in touch about our research and results. All in all it was a very enthusiastic bunch from two research projects, the Dept of Antiquities, and the RSCN (myself, Toby, Danielle, Phil, Leslie, Berndt, Carlos, April, Michael, Chris, Ahmad, Ahmad, Omar, Melanie, and Jessica) and we put together some really great ideas for increasing public interest and awareness of the prehistory of the Azraq area, and ways to present the sites to the local, national, and international public within the themes of preservation and conservation – two key themes for the Azraq area. That night some from the meeting stayed at our place and we did some flint knapping under the expert direction of Leslie. All in all, a great workshop!
Posted by Epipaleolithic Foragers in Azraq Project at 6:31 AM